The distillery was founded on June 2, 1893 by a group of Glasgow businessmen founded and opened in 1894. The distillery was 1904 WP Lowrie & Co Ltd. sold, which already in 1906 by James Buchanan & Co. Ltd. were acquired. On 29 October 1909, large parts of the distillery were destroyed by fire; after reconstruction 1910 was Coffey silently installed with a capacity of 2273 liters per hour, but it was in 1915 removed. Ten years later, in 1925, the distillery was the Distillers Company Ltd. (DCL) adopted in 1930 and their daughter Scottish Malt Distillers passed (SMD). 1964, in addition to the original two stills installed two more. Since 1985, the distillery is shut down. United Distillers (UD), the successor to the DCL, sold the now emptied plant in 1990 at William Grant & Sons which today as warehouses for Glenfiddich use. http://de.wikipedia.org/wiki/Convalmore 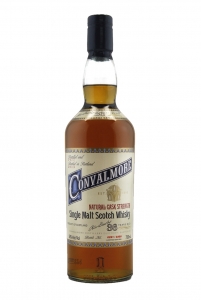 Convalmore distillery began distilling in 1894 at Dufftown in Speyside. The distillery closed in 1985. This... More ›