The distillery was founded in 1975 by Chivas Brothers, then subsidiary Seagram . In 1989, its production capacity is doubled. On 19 December 2001 , the distillery was sold Seagram to Pernod Ricard , which goes dormant production in October 2002 when the distillery is one of the most powerful in its portfolio: it can be operated by one person. Bottling and maturation are not made on the distillery site. On 27 May 2005 , Pernod Ricard who wants to make his mark his first of Chivas whiskey brands, decided to resume production on the site. Allt-á-Bhainne then restart. The entire production is used in the manufacture of blends of Pernod Ricard. There is a formal bottling as a single malt whiskey . Only independent bottlers and sell this whiskey. The water for the manufacture of Allt to Bhainne peuvent of Scurran and Rowantree source. The distillery has a mash tun 8.4 tons of stainless steel fermentation tanks making eight in total 352 000 liter stainless steel also, two wash stills and two spirit stills chauuffés indirectly with steam. http://en.wikipedia.org/wiki/Allt-A-Bhainne

Items under distillery Allt A Bhainne 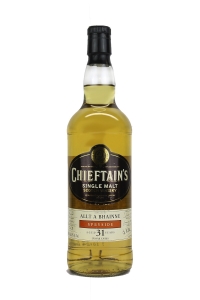