Stranahan's was founded by Jess Graber and George Stranahan, whom the whiskey is named after, in Colorado in 2004.[1][2] In 1998, Graber, a volunteer firefighter, met Stranahan, the founder and owner of Flying Dog Brewery, while fighting a fire at Stranahan's barn.[3][4] They struck up a conversation about whiskey, and were soon in business together.[4] One of the first craft whiskey distillers in the US,[5] Stranahan's is said to have "kicked off the Colorado distilling craze" with its whiskey and the designation it invented, Rocky Mountain Whiskey.[6] It was Colorado's first microdistillery,[7] and the state's first legal distillery since prohibition.[8] The first batch of Stranahan's Colorado Whiskey was distilled in 2004 and bottled in 2006.[4] Stranahan's was sold to New Jersey-based Proximo Spirits in 2010, with operations remaining in Colorado.[1] By 2012, Proximo had increased whiskey production from around 12 barrels per week to 30, with plans to grow into the high forties.[1][4] Stranahan's was sold in 38 states and 7 countries until 2010, when Proximo decided to scale down sales to mostly the Colorado area, maintaining the whiskey's availability in its home state.[4][9] Since 2011, Rob Dietrich has served as Stranahan's head distiller, after taking over from original head distiller Jake Norris.[3] http://en.wikipedia.org/wiki/Stranahan%27s_Colorado_Whiskey 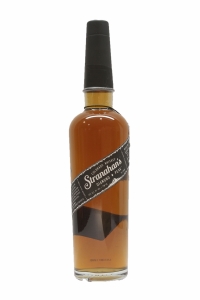 Stranahan's is a straight whiskey, aged in new charred oak barrels, with the final whiskey blended of 2-5 year... More ›