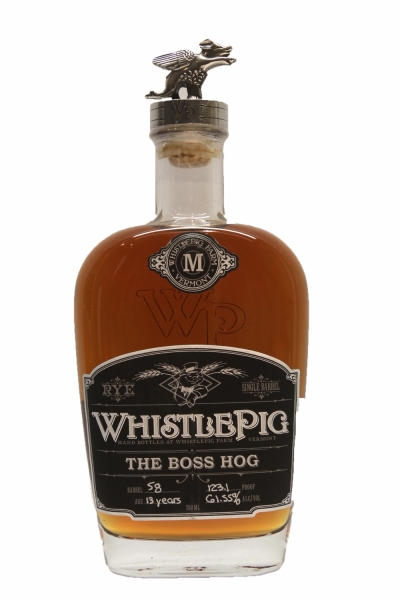 This years Boss Hog has been selected from among our oldest and most unique barrels  Bond 77. Bond 77 entered wood on April 5, 2001. As part of a quadruple barrel aging process, the Spirit of Mortimer spent nearly 14 years in a combination of new American oak, and early use bourbon barrels. Bottled at cask-strength, the Spirit of Mortimer represents our purest, most powerful, and most primordial expression of the worlds finest rye.
The Spirit of Mortimer is dedicated to Mortimer WhistlePig. Mortimer, our mascot, compatriot and friend, laid down his life this past summer while defending the honor of Mauve WhistlePig, his beloved Kune Kune spouse.
This years Boss Hog is Mortimers monument and memorial. Mortimers physical monument will be the Spirit of Mortimer, a finely crafted Danforth pewter topper which will sit atop each Boss Hog bottle and depict Mortimer midflight, with arms stretched to the heavens. Mortimers spiritual monument will be the unrivaled whiskey within the bottle. Barrel 56

Aroma: Ample wood and some campfire smoke on the nose, along with hints of apple cider and cinnamon. On the Palate: Chewy and fruity, with caramel, cinnamon and clove. Finish: Lingering, with hints of spice.

Please complete the form below and then click 'Send Message' button to tell your friend about Whistle Pig The Boss Hog Barrel 56.