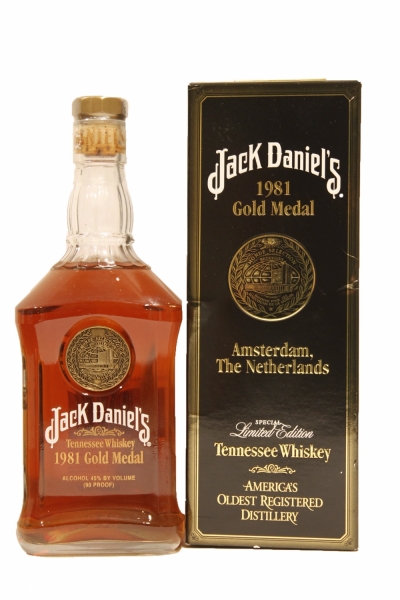 It had been 27 years since the Jack Daniel Distillery entered a Gold Medal competition, and much had happened with the Distillery during that time. Within two years of winning the 1954 Star of Excellence in Brussels, Belgium, Jack Daniels had experienced a 100-percent sales increase as well as a change in ownership. Lem Motlows four sons sold the Distillery to the Brown-Forman Corporation in 1956. By the end of the 1970s, Jack Daniels volume was increasing tenfold. Despite all these changes, however, there was nothing different about our commitment to making our whiskey. We thought it was important to demonstrate that commitment by entering the Brussels-based Selection Institut Pour Les Selections De La Qualité in 1981. Jack Daniels Tennessee Whiskey was awarded the competitions top medal, the Grand Gold Medal with Palm Leaves.

The seventh bottle in our Gold Medal series celebrates our 1981 Gold Medal. Through the years, weve often been asked why we stopped entering international whiskey competitions after winning Gold Medal No. 7.