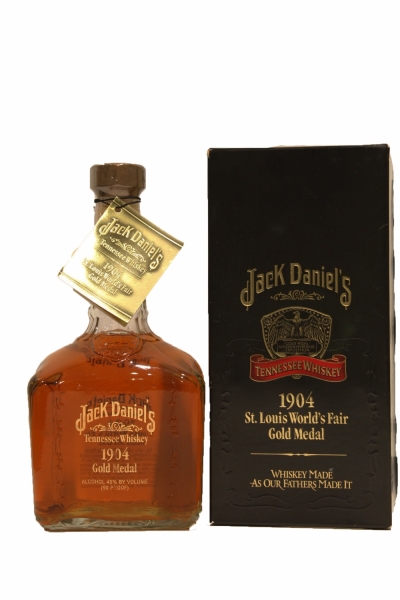 The first gold medal awarded to Jack Daniels Tennessee Whiskey took place in 1904 when Jack entered his whiskey in competition at the Worlds Fair in St. Louis, Missouri. Nearly a century later, in 1996, the Distillery debuted the Gold Medal Series with the 1904 Gold Medal commemorative bottle to recognize this prior achievement.

Beginning in 1996 and continuing for the next 10 years, the Jack Daniel Distillery released its Gold Medal Series of commemorative bottles. Comprised of seven unique designs, each bottle in this series celebrates a different gold medal won by the Distillery. In the U.S., the series featured 750ml bottles filled with 90 proof whiskey. International markets offer these bottles only in a 1 liter size, with the exception of the first bottle in the series which was available only in the 750ml size.

Please complete the form below and then click 'Send Message' button to tell your friend about Jack Daniel's 1904 Gold Medal St. Louis Collection #18.