Anchor began during the California Gold Rush when Gottlieb Brekle arrived from Germany and began brewing in San Francisco. In 1896, Ernst F. Baruth and his son-in-law, Otto Schinkel, Jr., bought the old brewery on Pacific Avenue and named it Anchor. The brewery burned down in the fires that followed the 1906 earthquake, but was rebuilt at a different location in 1907.[2] There is no record of what Anchor did during Prohibition, but it resumed serving Steam Beer after Repeal, possibly as the only steam brewing company still in operation.[3] However the brewery burned down yet again within the year, and it relocated once more, this time to a building a few blocks away. http://en.wikipedia.org/wiki/Anchor_Brewing_Company 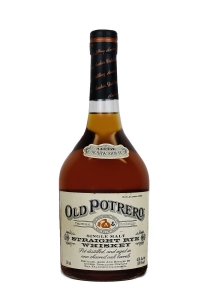 Old Potrero Straight Rye Whiskey is an attempt to recreate the original whiskey of America. Distilled in small... More ›